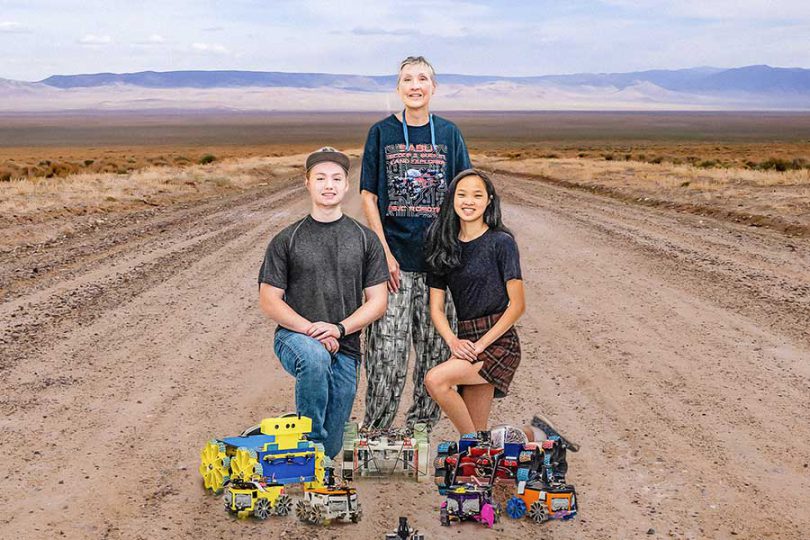 Everyone loves an underdog — the long-shot horse that wins the Kentucky Derby by a nose; the rookie quarterback who throws the winning touchdown in the final seconds of the game; or the middle-aged Olympian who, against all odds, racks up more medals than competitors half his age.

But not all underdog stories revolve around sporting events and athletic achievements. This is a story about an academic underdog, a heartwarming account of a two-year community college, Trinidad State College, that is home to a robotics team that competes against bigger, mostly four-year colleges and not only holds its own but consistently defies expectations.

It’s the story of the little college that could and the mathematics professor, Cindy Clements, who started it all.

Trinidad is not what you’d expect. One of the main streets of this southern Colorado town in San Isabel Electric’s service territory is paved with bricks. And while many Colorado towns boast about their sweeping panoramic views and towering mountain peaks, for roughly 40 years Trinidad’s claim to fame was as a destination for people seeking sex reassignment surgery.

Equidistant between Denver and Santa Fe, New Mexico, with a population hovering around 8,000, it’s surprising that Trinidad has a college at all. And yet, founded in 1925, TSC was the first community college in Colorado. The college is widely regarded as having the best gunsmithing school in the United States. Students can also pursue a vocational or arts, science track at either the Trinidad or Alamosa campus. 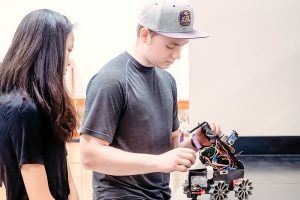 Many high school students take advantage of the unique opportunity to earn college credits and pursue concurrent enrollment. In fact, this past school year, the seven-member robotics team included two high school students. The college is so small, with only about 1,000 students on the Trinidad campus, the robotics team is considered an athletic team and the athletic director publicizes most of their events.

“No one expects Trinidad to have this kind of program,” Clements says wryly.

Robotics team member Kayla Gardiner agrees: “Cindy is incredibly dedicated to the robotics program. The region would not have anything like it without her.”

LOOKING BACK
According to the TSC website, “The Trinidad State Robotics Team got its start in 2009 when the school was invited to join the Colorado Space Grant Consortium. The program has evolved gradually and each team has improved on the previous year’s design.”

This past spring, students again competed in COSGC’s Robotics Challenge at the Great Sand Dunes National Park. As part of the event, students submitted a research paper and presented their research at COSGC’s symposium.

The first paper from a TSC team was accepted in 2011 and, since then, the team has won best robot in its weight division every year it has been entered. It has also won the People’s Choice Award five times, and its paper/presentation has won a session award four times. In 2022, TSC robotics again took the best paper/presentation session award.

Clements’ efforts do not go unnoticed. According to Bernadette Garcia Galvez, interim director of the Colorado Space Grant Consortium, “Clements is an exceptional educator. She has developed an approach in which she is able to engage beginning students and develop their skills to a point that her teams are consistently the only team able to demonstrate advanced autonomy at the annual event. She gives her all to keep the program going.”

Her students, who refer to her as “Ms. C,” appreciate her ability to connect. Co-captain of the robotics team, Ruth Edwards, comments, “I love the way she teaches, especially math. In the past, my math teachers would largely dismiss my questions because I was deeply concerned about the minutiae of how things work and fit together. She does not dismiss these questions; she understands why I want to know.”

A CHANCE CONVERSATION
Clements was in the middle of teaching a math class when she overheard a conversation in the hallway between a physics professor and another colleague about robotics. On impulse, she called out, “I want to do robotics.”

Impulsive is not really Clements’ jam. She leans more toward the practical — she’s the type of person who started thinking about her retirement while she was in her 20s, which led her to buy acreage outside of Trinidad in 1998 even though she had a teaching job in Oklahoma. Fast forward eight years and Clements landed a job at TSC.

After that chance conversation, Clements took a crash course on building robots from a person on the Colorado Space Grant Consortium and went to work.

“In 2010, we made our first robot completely out of recycled pieces and parts and were thrilled it moved in the sand and went in the right direction. It was a simple goal and we achieved it. Not only did we achieve it, but there were only two out of 30 robots that moved at all,” recalls Clements.

THE S.W.A.R.M.
When you think of robots, you might think of Rosie the Robot in the cartoon sitcom “The Jetsons”; R2-D2 in “Star Wars”; or the adorable little trash compactor, WALL-E, in a 2008 film. The Trinidad robots are just as lovable as their Hollywood counterparts and, while they don’t talk, they are cute. Yes, cute. 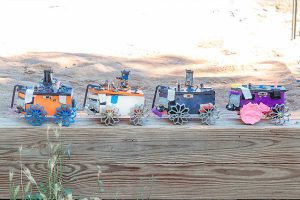 The Trinidad State College robots are just as cute as their Hollywood counterparts.

The wheels look like large LEGO® pieces, and some sport bright pink duct tape. The bodies are bright primary colors that house little cameras and a gaggle of electronic whosie-whatsits.

But building a robot is a painstaking process, and it doesn’t happen overnight — start to finish is about six months. “I take students and teach them everything and anything they need to know, literally nuts and bolts, from electronics to 3-D design and testing.” In 2022, the seven-member robotics team built five robots known as the S.W.A.R.M.: Scorpion, WASP, ANT, Roly-Poly and Mantis.

Robots are about the size of a tissue box, but, unlike a box, they can perform incredible achievements. They whir, spin and pivot. But most importantly, they’re autonomous — they think for themselves.

Clements explains, “Currently, the robots on Mars are dependent on a person giving them further instructions back at NASA. This year, our goal was [to learn] how inter- connected robots can work together to communicate with each other and create accurate maps on planets such as Mars.”

THE PROCESS
Work begins in December each year, at the latest. There are classes in programming, electronics, 3-D design and building. Then the fun begins. The students meet and divide into groups; next, they program, build, test. Repeat. Program, build, test. Fine tune. Test runs down the hallway. Revise. Tweak. More programming. Collaborate. More test runs. Tweak, tweak, tweak. Finally, months later: the sand pit. Which brings us to the story of Clements and the sand pit. 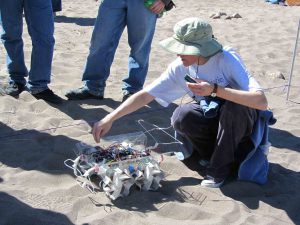 Test driving a robot in sand imported
from Alamosa. The sand originated
from the Great Sand Dunes.

Clements will stop at nothing to help her students succeed, even if it means importing sand from Alamosa. Say what? The sand at the Great Sand Dunes is very similar to the terrain on Mars. Since all robots compete and are tested at the Sand Dunes in April, Clements simulates a mini Sand Dunes on campus.

“We have actual Sand Dunes sand. The farmers around the Sand Dunes don’t want the sand that blows onto their farms, so I hired someone to go around and pick up the sand and bring it to Trinidad,” she says.

It’s just one more reason what was once a long-shot team in Colorado robotics is now the team to beat. 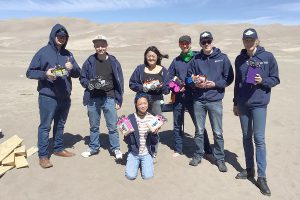 EVERETT ALLEN, 21, CAPTAIN
Allen grew up surrounded by the beauty of the Grand Canyon and attended the only K-12 school there. As a child, he loved Legos.

“There’s a joke that every great architect, engineer or civil engineer played with Legos as a kid,” he says. A few years before high school graduation, his family moved to Trinidad where he took advantage of the concurrent program between the high school and the college. Not surprisingly, he sees some similarity between robotics and Legos.

With an easy smile, he remembers launching the team’s robot at the Great Sand Dunes. “It is a Lego project, but it will take six months of your time and it will still break when you deploy it,” he says.

RUTH EDWARDS, 18, CO-CAPTAIN AND LEAD PROGRAMMER
Edwards is upfront about her reasons for joining the robotics team: “Initially, what attracted me to the team was boredom. What made me stay was the discovery that I truly have an aptitude for programming.”

Edwards has a passion for problem solving and troubleshooting. “I appreciate the systematic approach that is required for these situations, and I love watching as the culmination of all the debugging turns into a real product,” she says. After two years on the robotics team, Edwards credits it with opening her eyes to how “vast and invigorating the engineering field is.”

LANDON KNIGHT, 17, BUILDING TEAM LEAD
Knight discovered his passion for robotics when he was 10. “In 8th and 9th grades, I was a part of the robotics team for Branson High School, and it was there that I learned to build things and to use building equipment,” he says. “I had heard of the robotics program at TSC, and in the 10th grade I began taking concurrent enrollment and joined the robotics team.”

He credits Clements for “keeping me inspired and helping me find my strengths.”

SUN RICHARDSON, 16 3D DESIGN TEAM
While most 16-year-olds dream of getting their driver’s license, Richardson was looking for something else, an intellectual challenge. “I have more intellectual curiosity than my peers.”

Already fluent in Mandarin, Richardson’s intellect met its match on the robotics team. As the youngest student on the team, she found the intellectual challenge she was after. “I joined with zero background knowledge and no experience in building electronics or programming,” she says. “I was put on 3D design and had to learn how to use modeling software.”

DALLAS ABBOT, 20, BUILDING TEAM
Abbot is a self-described lone wolf. As an only child, he “speaks in numbers better than words.” At 15, he moved to Trinidad from South Carolina and initially started in an online school. Recognizing the need for more of a challenge, he moved to concurrent enrollment at TSC.

Friends recommended the robotics team, so he joined. “It helped me make a lot of friends and learn to work in a team. It brought me out of my shell,” he says. He plans to attend Eastern New Mexico University for a bachelor’s in math with a minor in biology.

JOSHUA BRESSAN, 21, ELECTRONICS TEAM
Initially, Bressan had no interest in being part of the robotics team. “I’m busy,” Bressan remembers telling Clements, his professor in calculus. Nevertheless, Clements convinced him to stop by and take a look. Once he saw all the wiring, coding and testing going on, “I was sold on it.”

Bressan graduated with an associate degree in mathematics and says, “I gained a lot of knowledge in team dynamics and gained friendships and connections that could springboard me forward career-wise.”

KAYLA GARDINER, 38, 3D DESIGN TEAM LEAD
Before moving to Trinidad in 2019, Gardiner worked at Lockheed Martin in Littleton building wiring harnesses. The robotics team allowed her to “find something technical to work on in Trinidad and to learn to use 3D printers and Fusion 360 CAD software.”

Her hopes for the future include getting a job with SpaceX to “help them build out the Moon and Mars program.”

Joanne Palmer is a freelance writer from Colorado’s Western Slope.