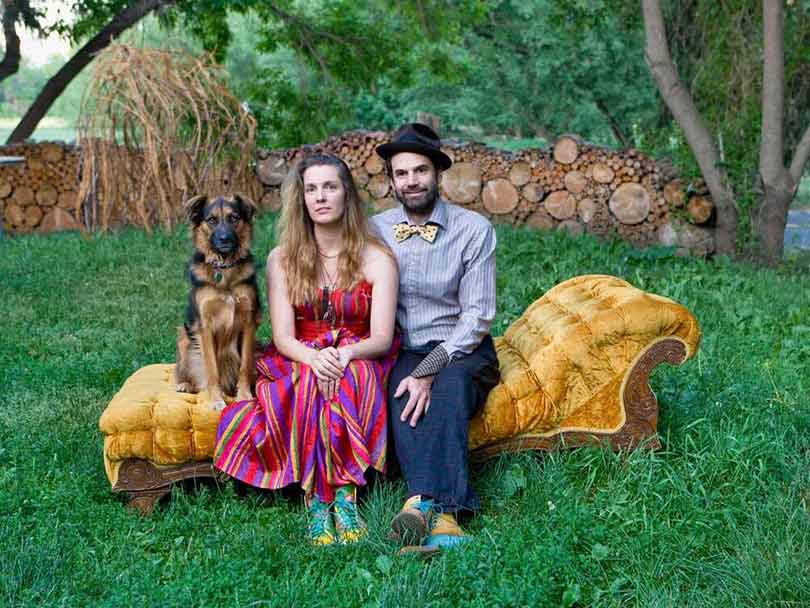 Annabel Reader and Dan Huling, the creative duo who own and lead the Colorado Shoe School in Fort Collins. Photo credit: Tina Hagerling

Annabel Reader will never forget the moment she met her future husband, Dan Huling. Both had been hired as entertainers for “A Nightmare Before Christmas” party. Huling was a 6-foot-2-inch juggling elf and Reader was dancing around on stilts, Reader recalls.

“He was under a streetlamp and looked so handsome in his costume like he was a film noir character. He asked me out but I couldn’t go and, then, nothing happened for months. I asked him out nine months later because his name was playing on repeat in my head. Finally, I was like, ‘OK, universe, I hear you.’” 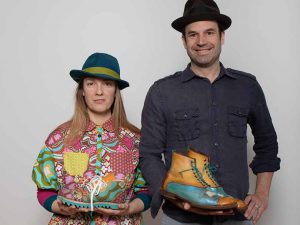 Reader and Huling’s unusual meeting turned into a creative and business partnership that’s more “Christmas” than “Nightmare.” Fast forward five years and the juggler and stilt walker are married and living happily ever after running Colorado Shoe School.

Yes, you read that right: They teach people how to make shoes, boots and sandals. Think high-top sneakers with a lingerie theme or a dress pump inspired by a 1920s vintage photograph. There’s nothing like kicking up your heels in a shipwreck-themed pair of purple and red sneakers with a hidden octopus eye. If you can dream it, Huling and Reader can help you make it.

If you’ve never thought of making your own shoes, that’s because theirs is the only shoe school in Colorado and one of the few in the United States.

A life of creativity
Coming up with creative ideas, solutions and innovations is nothing new for this couple. When they met, Reader, 44, a native of New Zealand, was working as a costume designer for Emerald City Opera in Steamboat Springs and, later, as a shoe mistress for the Cirque du Soleil production, “Luzia.” Understandably, shoes for the production had to be in tip-top shape. The last thing an acrobat wants to worry about is tripping over a shoelace or a sole falling off midjump.

“I was responsible for approximately 200 pairs of shoes,” Reader says. “I had to make sure they were all in excellent shape, the colors were vibrant, the heels weren’t worn down and the soles were in good condition. Any down time I had I started experimenting with making my own shoes.”

Huling, 43, was equally busy — playing with fire. He and his brother cofounded “The Handsome Little Devils,” an entertainment company that creates immersive art experiences. “We developed a routine with two flamethrower pogo sticks and six flaming juggling torches,” Huling says. “We took the act all over the world including Japan, Australia, New Zealand, Italy and Canada.”

To jazz up their juggling act, Huling and his brother built elaborate contraptions for their company, such as a driving vaudeville stage and a kinetic juggling machine. To top it off, they created a little mechanical monkey puppet to help pedal and steer the creative contraptions.

In 2018, eager to spend more time with each other and less time on the road Huling and Reader started brainstorming job options and looking for something else they could do. “Touring is magical and exhausting all at once,” Reader says.

Shoe school’s beginnings
Before a trip to New Zealand, Reader came across a web listing for a shoe school there and shares, “The class was sold out but I pleaded for them to let us in and they did.” The intensive five-day class was followed by Zoom workshops with the New Zealand instructor and some pointers from Jim Brainard, a cowboy bootmaker in Parker, Colorado. “He gave us tips and tricks on how to attach soles and build up heels,” Reader remembers.

Still, they had their doubts. As Huling recalls, “I was hesitant to make a career change, not knowing what the future would be. How and what were we going to teach? Was it a good idea? Were we good enough?”

Peggy Lyle, director of the downtown creative district in Fort Collins, had no doubt they were on the right path. “I felt very privileged to be the first person they told. I instantly thought this was going to be a big success. I knew they were onto something that was true to their hearts and would resonate with lots of people.”

Lyle took a two-day sneaker-making workshop with the goal of creating a unique birthday present for a friend’s 50th birthday. “The sneakers had a Phoenix theme. I thought it was appropriate for coming out of COVID-19 and my friend’s milestone birthday,” she says.

For Deborah Porter, Colorado Shoe School snapped her out of her grief. Her parents had recently passed away, she had retired from her beloved job as a United Airlines flight attendant and the things she normally liked to do, needlepoint, embroider or paint, just didn’t interest her. For 40 years she traveled the world, often with her mother. “After my mother passed from brain cancer, my job lost all its allure.”

Although she had a retirement bucket list — learn Spanish, get finances in order, make a hat — she lacked motivation to pursue any of it. “I felt like a balloon deflated on the floor,” she remembers.

“Then one day my sister spied an article on Colorado Shoe School in The Denver Post and rushed it over to my house. She knew I had wanted to learn to make shoes for years but I never found the right class in the right location.” Porter didn’t hesitate — she signed up right away for a two-day sneaker-making workshop in July 2021. “I was excited and nervous. I’m 70 years old and worried it would be a disaster, that maybe I couldn’t do it.”

But she did. Working with Reader, Porter made a beautiful black and white, lingerie-inspired high-top sneaker with lace touches and mesh peep holes. “I wanted a dressier sneaker I could wear out at night,” she says.

To help turn her vision into reality, Porter purchased and brought a pretty black nightgown to cut up and use in her sneaker. Colorado Shoe School had no problem helping Porter create her shoe. “The class was a lifeline for me,” Porter says. “It opened up my creativity again. Annabel Reader is such a dear. She is a marvelously creative, supportive woman.”

Finding inspiration
Huling and Reader are self-described “conscious consumers.” Not only are they committed to making fun, fanciful and functional shoes, they also upcycle and recycle as much of the material as possible. For example, the rubber cup soles are partially made from recycled tennis balls. A painter’s drop cloth Reader saved from the dumpster was worked into a sneaker design. A zipper might be reclaimed from an old leather jacket while a battered leather couch cushion can serve as the basis for a pair of boots. 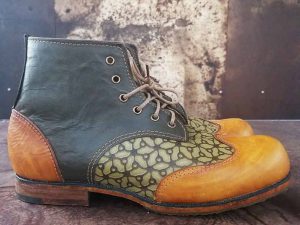 Even plastic bags have been repurposed. “A college student wanted to make sneakers out of plastic bags and came here to learn how to do it,” Reader recalls. “We helped him iron the plastic bags together to fuse them. He brought in a vinyl billboard to make part of the shoes and gave us the rest of the billboard. Another student used the big mouth and eyeball images on her shoes.”

Inspiration comes in many forms. One student brought in luggage his grandmother had given him over 40 years ago. It had a lot of personality but not much practicality (think: no rollers). He didn’t want to throw the suitcases out but he didn’t know what to do with them either. So, he cut up the buttery soft leather and made shoes out of it. “The shoes will continue to travel in a different way. It’s a lovely story with a lot of romance to it,” Reader says. 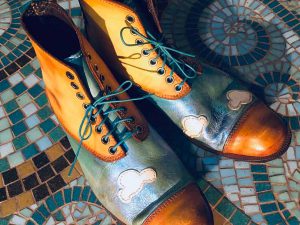 For Teri Ficke, 58, an information technology project manager, necessity really was the mother of invention. Her nephew’s wedding was coming up and she wanted a comfortable pair of shoes to wear. “The last wedding I went to my feet hurt; I did not want to repeat that experience,” she says.

Already a Colorado Shoe School veteran, her inspiration came from a 1920s vintage photograph of her grandmother Anna wearing black pumps with cutouts in the front. In a five-day workshop she re-created the shoe. “Shoe making speaks to me in terms of the practicality of it and making something that fits,” she says. It was Ficke’s fifth shoemaking workshop and no doubt she’ll take another. “Not only are you in an inspirational environment, but the people behind it are inspirational, too.”

Shoe school campus
Colorado Shoe School is headquartered in Poudre Valley Rural Electric Association’s territory, in Bellvue near Fort Collins. The “campus” would make Willy Wonka proud. The couple’s creative touches and impressive DIY abilities are on display in a wood-fired hot tub made from an old stove and horse trough and a World War II train car Huling found in a salvage lot in Nebraska. 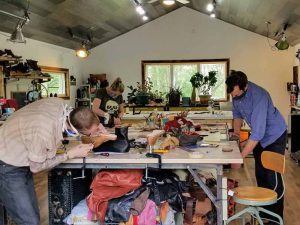 Students work in the school’s studio with its “tree house” feel and view.

To house the couple’s collection of swag lamps and plants, Huling bravely cut a large hole in the train car’s roof to create a soaring atrium. The tiny train house is available for rent by students and may eventually house an artist in residence. Shoe school classes are held in a cozy 600-foot studio purposely built above a garage so students have the sense of being in a tree house.

There’s a lot to learn in shoe school. A one-day sneaker-making workshop lasts eight hours and is limited to four or five students. Once students decide on a color scheme, they choose between a high- or low-top sneaker. Then comes measuring and fitting. Shoes can be shaped to fit any size variation, a true blessing for students with an unusually narrow or wide foot.

Students are tasked with cutting and dyeing the leather, gluing and sewing leather pieces together, putting in grommets for laces. Personalized creative touches are encouraged. Students routinely create one-of-a-kind shoes with a bold mix of colors and patterns and custom cutouts of everything from cacti to flaming hearts.

Students are encouraged to write a goal or mantra into their shoes. This stems from Reader inscribing the note, “You got this” in a pair of shoes created just before she did something challenging. “Now every time I wear those shoes I feel empowered,” she says.

Huling and Reader serve as both cheerleaders and coaches. As Lyle puts it, “They are not creating shoes for others. They are facilitators helping people be creative to make wearable pieces of art.” Reader agrees: “Some students come to learn how to make shoes, most come to express their creativity through the shoes they make.”

Huling and Reader’s combined backgrounds in theater, vaudeville and costume and prop design are ideally suited to help clients create memorable shoes. Says Huling, “I am constantly inspired by Annabel’s creative and unique approach to shoe making. I tend to get sucked into the technical side of shoe making and am impressed by Annabel’s ability to test the outer limits. Having a partner like Annabel makes me feel like anything is possible. We make an amazing team and we encourage each other to be daring and explorative.”

The Colorado Shoe School offers a variety of classes ranging from a one-day sneaker-making workshop to a more intensive five-day shoe- or boot-making session. Prices range from $190 to $890, which includes all supplies and hands-on instruction. Currently classes are limited to four students and fill up quickly.